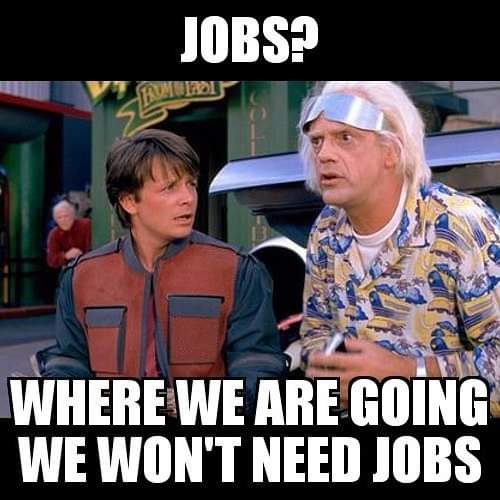 No jobs in the future? The idea of having a job is so 20th century. In fact most of the things we stress over we were able to do without for centuries. We may have been better off in some areas.

If you want to see what the future holds just study history. Mankind is one colossal experiment of hitting bottom and starting over. Usually within a span of 2000 years.

We may be in an awakening now. They will forget all about it within one generation. A new age will begin and within a few centuries man will corrupt that too.

We are not going to suddenly”evolve” out of something we have been doing for centuries.

Maybe it’s a blessing in disguise.

This site uses Akismet to reduce spam. Learn how your comment data is processed.

Unity in all religions

To look to the future, study the past

Error: Twitter did not respond. Please wait a few minutes and refresh this page.

I grew up in a working class family in the Southwest region of the United States. I was also raised with Judeo-Christian values and the Bible even though we were not regular attendees of church. I wasn't baptized until I was 24 and even that was in Canyon Lake in New Braunfels, Texas on a camping trip in July of 2001. I have been writing devotionals ever since and transitioned into blogging exactly ten years later and look forward to writing short stories and screenplays as part of my long term goal. The goal of the Liberal Conservative blog is to try to find balance in a world that seeks to go to extremes. Since balance is the key to wellness, I can consider myself to be a wellness blogger, though I use humor because there is a proverb that teaches that laughter is the best medicine.